An interview with Dan Hershberg, Co-Founder and CEO of Workhorse Brewing Co., a local Philadelphia brewery dedicated to crafting good beer and a brand that lives up to the values reflected in its name.

Philly-born. Philly-proud. Yeah, you could say that Dan Hershberg is a Philly guy. Dan has started two Philadelphia businesses that lean into the culture of his homegrown city. After working for the Philadelphia Phillies and ESPN, Dan took his passion for sports to start his own apparel line called Philly Phaithful. A decade later, he closed up shop to start his latest venture – Workhorse Brewing Co. Located in King of Prussia, the taproom and brewery is built upon the values of the city: consistency, dependability, reliability, and diligence. While you may think Philly Phaithful and Workhorse are passion projects that Dan created based on his personal interests, they were actually business ventures that someone brought to him.

At an early age, Dan knew that he wanted to be his own boss, and it just so happened that a few opportunities came knocking on his door to do just that. We often think that an entrepreneur is someone who is constantly thinking of the next big idea to disrupt an industry, but Dan has a different perspective. Both Philly Phaithful and Workhorse Brewing Co. were not originally Dan’s idea. His cousin and later his uncle presented him with these business concepts, and it was Dan’s passion, dedication and commitment that turned these projects into legitimate businesses. Ideas are rampant, and Dan shows that ideas only become thriving businesses with perseverance and a knack for execution.

In Dan’s opinion, “entrepreneurship is about taking advantage of opportunities when presented,” which he is exactly what he did. In both instances, one of his family members presented him with a business opportunity and Dan took the risk. If the stakes weren’t high enough already, both family members dropped out in critical moments of the companies getting off the ground. Dan rose to the occasion. For him, being an entrepreneur is not necessarily about having the big idea, but being able to develop a strategy and then execute it.

In this episode of GrowthCurve, Dan and I chat about the recent opening of Workhorse Brewing Co. When his uncle stepped away from his active role in the project, Dan assumed the role of Interim CEO to make sure the brewery continued to move forward. Even though Dan’s a branding guy, he took on the responsibility in stride. We talked about his strategy with regards to branding, distribution and innovation as well as the challenges he faced in his newfound leadership position.

Dan has started two Philadelphia-based businesses. His first was a sports apparel line called Philly Phaithful where he created a wide array of unique designs made for Philly sports fans. After a decade, he decided to change industries and open a brewery called Workhorse Brewing Co. where he is determined to break through in the Philadelphia craft beer scene.

For six months, Workhorse Brewing Co. will have a pop-up at 2401 Walnut Street. The center city taproom has partnered with Spread Bagelry to takeover the rooftop location. The companies created a shared space where customers can try one of their delicious beers alongside a flatbread pizza or bagel chip nacho.

Not only are there a lot of breweries, but also a ton of different beer flavors and profiles. With so many options for consumers, it’s hard to stand out and even harder to gain customer loyalty. Dan knows that having a high-quality product is the baseline for any craft brewery. To innovate, he looks beyond the product and packaging.

One of the initiatives that Dan and his team are most proud is Flights to Go. They offer a portable flight featuring six unique beers in eight ounce cans. It’s something that everyone has experienced at a bar, but not at home. Dan took that little insight and turned into something new and exciting.

We all know that the craft beer industry has experienced explosive growth in the past ten years. As of now, craft beer makes up 13.2% of the total beer volume and reports $27.6 billion in retail. According to the Brewers Association, the total beer market is down 1%, but craft beer saw 4% growth in 2018. All of that is to say that craft beer is a hot industry, but is it saturated? Is it too late for someone like Dan to enter the market? How do you stand out in the crowded space especially when brand loyalty is low?

If I have these questions are an outsider, then they are definitely questions that Dan asked himself before opening his brewery. One of the first things Dan did in the beginning stages of his business was to travel the country and visit as many breweries as he could. He found on his national tour that people were happy to talk to him about their own successes and failures in starting a craft brewery. As Dan put it, craft breweries are working together to raise the overall portfolio of their products.

Even though the industry is crowded, Dan is a firm believer that it’s not too late to enter the market. After all, customers want craft beer and it’s on the brewery to stay top of mind. Even though a customer may love your beer, it doesn’t mean that they will only go to your brewery or purchase your beer at a ball game or a six pack for home. Dan talked about how it’s necessary for him to always think of new ways to promote the brand such as events, partnerships and remaining relevant in the cultural conversation.

Dan has a vision to build customer loyalty for Workhorse. He took his knowledge from his old business and brewery tour to start his own playbook 1) Win in Your Own Backyard and 2) Go Big or Go Home.

Winning In Your Own Backyard

Dan’s a Philly guy. He learned a lot about his target market when he ran Philly Phaithful, which was a sports apparel company that operated around the success of Philadelphia sports teams. He used these insights in the development of the Workhorse brand. Philadelphia is a blue collar city with down to earth people. There’s no bullshit here. That’s why Workhorse is the “Beer Made Right.” It’s an approachable, high-quality craft beer that aims to create meaningful connections with its customers.

But is that enough? We’ve talked about the craft beer industry’s explosive growth, but with so many options, it doesn’t mean that customers are necessarily loyal to your brand. Dan talks about the importance of generating awareness and staying in front of people. That means you’re constantly promoting yourself, especially on your home turf. Win at home, then expand regionally.

We saw this vertical marketing approach in our Exyn Technologies episode. Exyn Technologies was focused on going deep in a category before moving onto the next one. The same concept applies here. Dan wants to win in Philadelphia. He wants people to enjoy their experience at their flagship brewery in King of Prussia and then go check out their Center City Tap Room or grab a six pack from the beer distributor. Or, maybe a customer buys a six pack on a whim and then decides to visit the brewery. Whatever the customer journey, Workhorse wants to be top of mind.

There’s also the matter of distribution. Workhorse self-distributes its products to its retail partners, and is legally only allowed to distribute in the state of Pennsylvania. He heard from other craft breweries on his tour that spreading yourself too thin geographically can often lead to spreading yourself too thin organizationally. This poses another reason that it’s necessary for Dan to go all-in with Philadelphia. Once Dan wins in the local market, then he can consider expanding into new territories as brand awareness increases. In other words, if Workhorse’s Philadelphia-inspired brand can win its own city, then, and only then, should it expand its reach.

One of the biggest decisions that Dan made to launch Workhorse was to purchase a 70,000 square foot facility in King of Prussia. Often, breweries can start in someone’s house, expand into a smaller facility and then face the hurdle of building a facility that can handle mass production. In Dan’s conversations with other breweries, he heard a constant theme that as they grow the #1 issue is lack of space. So, Dan took a risk.

Dan skipped the first two steps and got a facility that could produce beer for people visiting the brewery as well as for distribution purposes. In Dan’s words, “I want the business to grow as quickly as possible. I want to hit a homerun, not singles and doubles.”

The King of Prussia taproom and brewery opened in 2018. It’s a 70,000 square foot that offers 15 beers on draft, good food and a host of events throughout the week. Only a few months into the opening of the brewery, Dan had another opportunity come his way. One of his investors offered him a space in Center City Philadelphia to host a six-month pop up next to Spread Bagelry. With a footprint in King of Prussia and now Philadelphia, we’ll see if Dan’s big bet pays off in the short and long-term.

“Entrepreneurship is about taking advantage of opportunities when presented.”

What’s Next for Workhorse?

One thing that I want to mention is that I was impressed with Dan’s ability to assume the role of CEO when his uncle left the business. Dan would be the first to tell you that he’s more of a creative guy and that he wasn’t much into the operations side of the business. It was a do-or-die moment for Workhorse, and Dan stepped up to the challenge. As the interim CEO, Dan made sure that he had the right permits, hired a brewmaster to make delicious beer and found a team to help build the Workhorse brand. Now, that the brewery is open, Workhorse has found a CEO to handle the operations side of the business while Dan now pivots into his dream role of Co-Founder and Chief Branding Officer. It will be interesting to see how Dan handles this position.

Dan’s got a game plan. Even though he is not technically the visionary or idea guy behind Workhorse, he’s the driving force behind the startup. He’s entering a crowded industry and finding ways to win in the local market. There’s still so much that Dan wants to do, and I look forward to seeing what’s next for Dan and Workhorse. 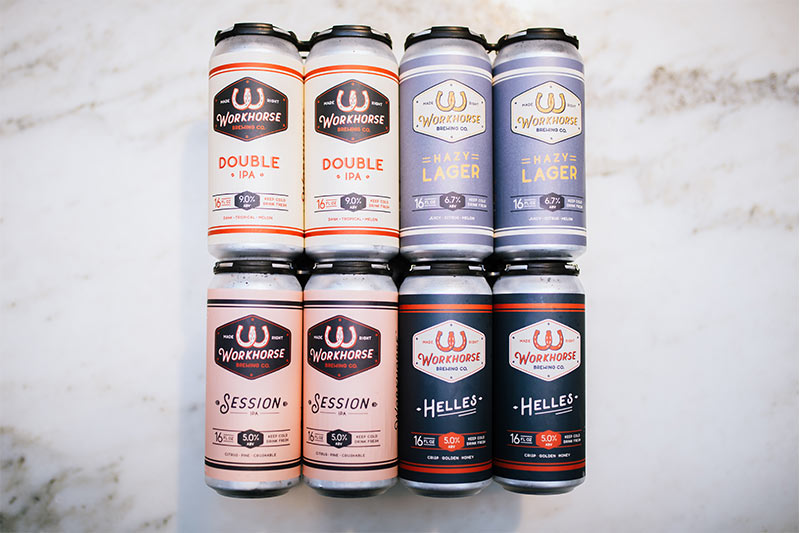 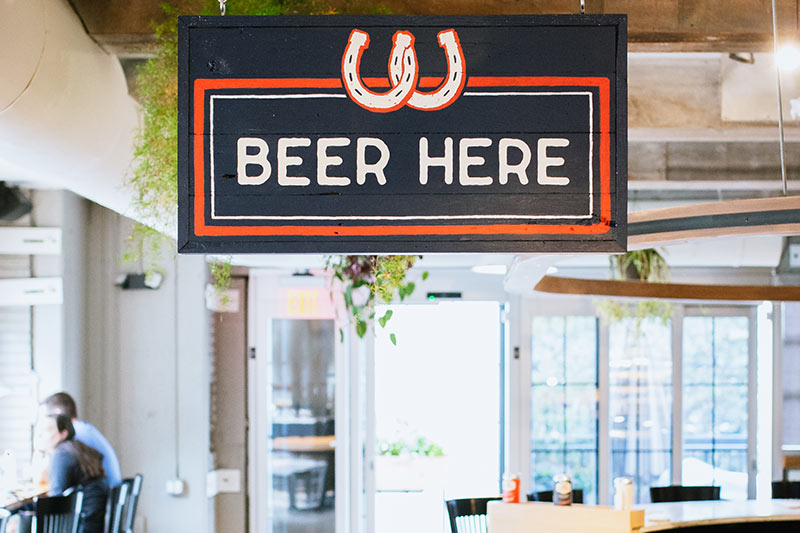 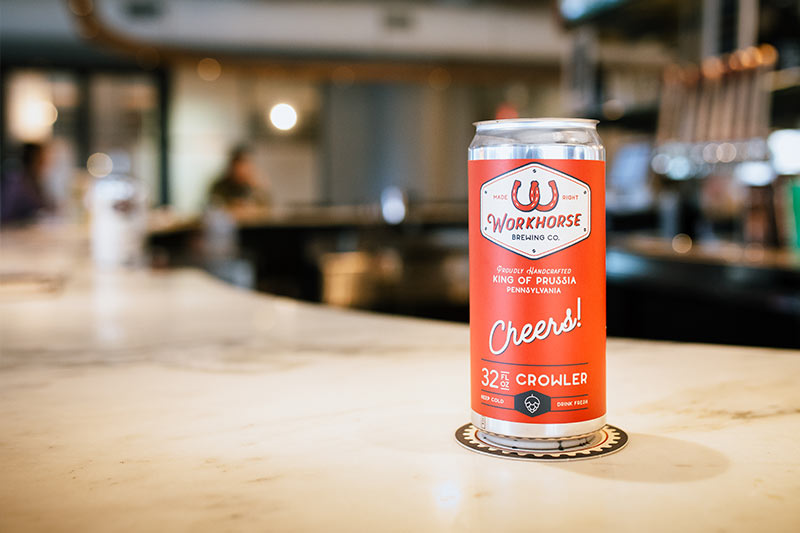